Located in the northeast part of the town of Lower Lake, the old Herndon Pioneer Cemetery stands today as an important reminder of Lake County’s long history.

The cemetery was established in 1856 by Lake County settler Nathaniel Herndon on a three-acre parcel from his own extensive land holdings. Since then it has been the final (and not so final!) resting place for many of the earliest residents of Lake County. Interments continued at the location for nearly a century after its founding.

Despite its lengthy history, there is much about the cemetery that is unknown today. The legal designation of the property has been clouded for decades due to incomplete or non-existent records keeping. There is no known registry of the burials there. Often even the ownership of the location has been a mystery.

In 1984 a small plaque was erected at the entrance to Herndon to acknowledge its existence. But other than that there were no improvements made on the property and it fell back into a state of general neglect.

Almost a decade later, in 1993, an effort was begun to determine and finalize a record of known burials, to locate and record inscriptions from headstones, and to get a final determination as to the legal status of the site. The results of these projects were only partially successful.

In 2004 Lower Lake resident (and Lake County Historical Society District One Representative) Kevin Engle began to organize all of the known information about the cemetery and start a new restoration. Engle’s efforts paid off. At a 2005 meeting of the Lake County Board of Superivisors meeting the Board unanimously agreed to “adopt” the historical property. Since then, the Board has begun the process of getting a formal title to the property. Lake County officials have also offered assistance to the Lake County Historical Society in its efforts to restore the cemetery.

Today the Herndon Cemetery still exists on its beautiful three-acre knoll overlooking the headwaters of Cache and Copsey Creeks. Although some of the grave sites and plots are reasonably intact, many others are damaged or missing altogether. Much work still needs to be done in order to restore this historic ground to a condition worthy of its significance. If you are interested in contributing to this worthwhile project, either with your time or with monetary or material donations, please contact Kevin Engle of the Lake County Historical Society.

(Thanks to Kevin Engle, whose article The History, Restoration Efforts, and Known Burials of the Herndon Pioneer Cemetery provided the basis for this article.)

As part of the ongoing efforts to gather information needed to preserve the Herndon Cemetery, on March 15, 2008 several members of the Lake County Historical Society and the Lake County Genealogical Society, as well as some interested private citizens, met at the cemetery to participate in a “grave dowsing” experiment.

“Grave dowsing” means just what is sounds like — using dowsing rods, such as those usually used to locate underground water sources, in an effort to find unmarked graves. The science behind such research is fairly theoretical, but the results of the efforts were interesting. A two-hour search of the property yielded several possible grave locations.

There are currently about 30 known burial sites at the Herndon Cemetery. It is estimated that there are possibly 50 to 60 more whose locations are lost to time.

Below is a brief photographic summary of the expedition. For a more detailed report, follow the link to the newspaper article at the end of this pictorial presentation. 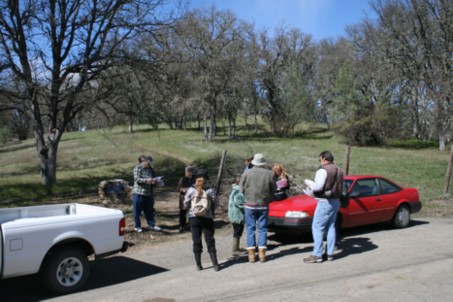 The group meets at the cemetery entrance. 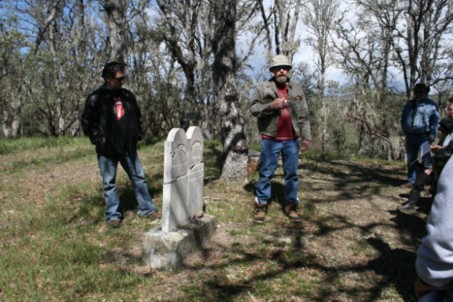 Kevin Engle (right center) explains the history of the cemetery and gives an overview of the efforts to preserve it. 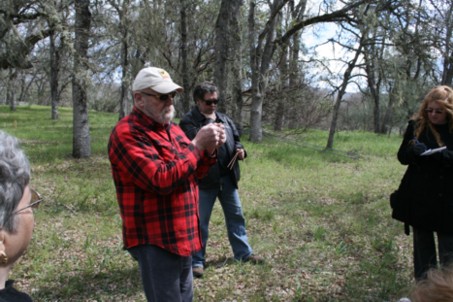 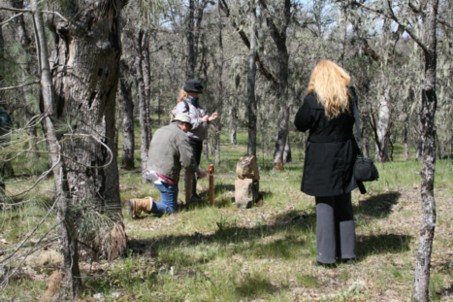 Kevin Engle drives a wooden stake into the ground at a possible grave location. 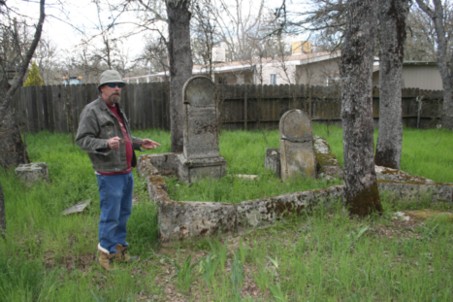 Engle at one of the cemetery’s family plots.

To read an article on this exercise which appeared in the Clearlake Observer American newspaper, go here: http://www.record-bee.com/oanews/ci_8703919